OF HIS BEATITUDE POPE AND PATRIARCH THEODOROS II

TO THE HOILY DIOCESE OF SIERRA LEONE

Background to the Visit

It was in February 2008 that an Orthodox Mission to Sierra Leone began to work in earnest. Two months earlier (Dec. 2007) His Beatitude Pope and Patriarch Theodoros had provided His blessings for such a Mission. We began with nothing in this war torn nation – which at the time was classified as the poorest nation in the world – all we had was the Gospel, our faith in the Lord Jesus Christ, a desire to preach the Holy Word and to establish Orthodox Christianity for the first time in the history of this forgotten region of West Africa. Exactly four years later (February 2012) His Beatitude would pay the first ever papal visit to the Atlantic coast of West Africa.1

The Labour of the Interim Years

During those four years between the initiation of the Orthodox Missionary Division of Sierra Leone and the coming of the Patriarch this year, God intervened in a mighty way to transform a small missionary campaign into an established Diocese in West Africa with ecclesiastical responsibility for seven nations (Liberia, Sierra Leone, Guinea, Guinea Bissau, Senegal, The Gambia and Cape Verde). A Diocese that can claim in the Lord the establishment of various major ecclesiastical and philanthropic projects:

By the grace of God, the blessings of His Beatitude, the assistance of our generous sponsors:

the Diocese was now ready in February to receive as its seal of its coming of age, and as its vivid recognition as a fully fledged Diocese of the Ancient, Apostolic and Venerable Patriarchate of Alexandria – the visit of His Beatitude Theodoros II – the apostolic successor of the Apostle and Evangelist Mark. 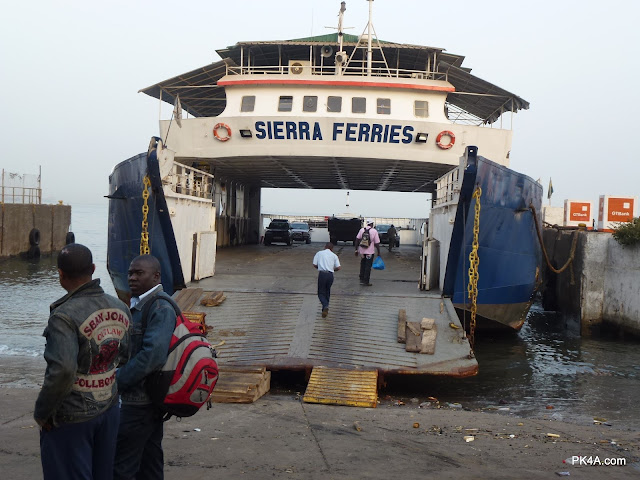 His Beatitude (accompanied by His Eminence Metropolitan George of Accra) landed at Lungi International Airport from Lagos (Nigeria) on Wednesday morning (Feb. 22nd). Government representatives were at hand to greet him and offer all the necessary protocol required for an official visit with a Presidential limousine and motor cycle escort ready to take him to Freetown. This service was offered by the Ministry of Foreign Affairs and State House for the entire duration of His Beatitude’s stay in Sierra Leone.

Once the Ferry from Lungi landed in Freetown, he was met by the acting Lord Mayor of Freetown and a line of waving children extending all the way from the wharf to the City Council.

The Golden Key to the City of Freetown 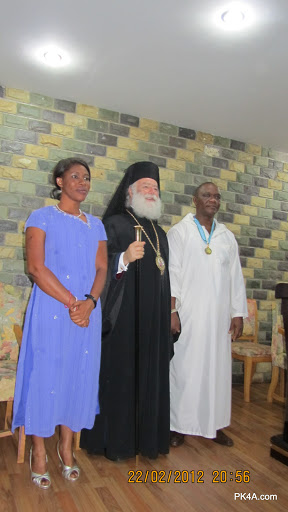 The Councillors, Deputy Mayor and the Lord Mayor of the Council of Freetown held an extraordinary meeting in council chambers where His Beatitude was officially welcomed and granted the golden key to the City of Freetown – thus being declared a “Free Citizen of Freetown.” This is the first time that any member or representative of the Orthodox Church has been granted such an honour by the capital city of Sierra Leone.

That same evening, prominent government representatives, ambassadorial delegates (including a representative of the Government of Egypt) , and various other dignitaries (including the Roman Catholic Archbishop of Freetown) gathered at the Bintumani Hotel Reception Hall for an official welcome and gathering in honour of His Beatitude.

Meeting the President at State House 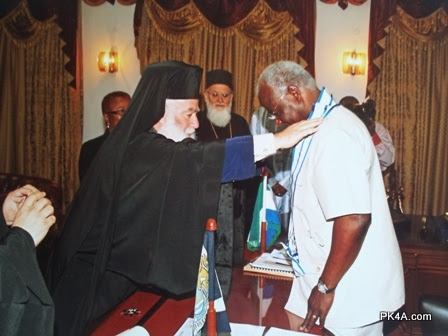 Visit to the Village of the Disabled

The same afternoon His Beatitude paid a pastoral visit to our village for the disabled at Waterloo (St. Moses the African Village). Here he was 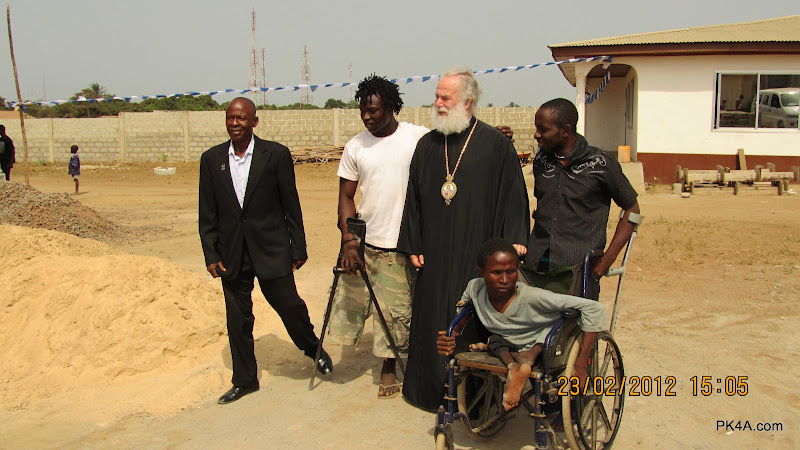 enthusiastically welcomed by the children, parents and teachers of our school (Orthodox Christian School “St. Jacob’s Dream”), the entire community of the disabled which we house and feed, as well as our priests and staff. Prayers were offered and His Beatitude spoke to a packed and most welcoming congregation. He then made a tour of the entire compound visiting the clinic, the school, the houses of the disabled and their workshop. A foundation stone was also laid for our Church of the Resurrection / St Moses by His Beatitude and unveiled the official inauguration plaque of the church. Fr. Stephanos Kamara (the compound chaplain) hosted His Beatitude and His Eminence at the priest’s house on the compound where light refreshments were offered by Presbytera Alexandra.

Liturgy and Ordinations at the Cathedral

The next mooring (Friday) His Beatitude was welcomed by the pupils, staff and administrators of the Freetown Orthodox Christian School (one of the largest Orthodox schools in Africa). During the divine liturgy at the Cathedral two ordinations to the office of Diaconate took place officiated by His Beatitude and His Eminence. After the liturgy a foundation stone was laid by His Beatitude for the cathedral as well as for our new double story school building (The Faldameion Building). The new school building was also officially inaugurated on the same day.

His Beatitude Visits our College and Chapel

The following day (Saturday, February 25th) His Beatitude visited our Diocese Headquarters (Paradise Kids House). This is located in the centre of 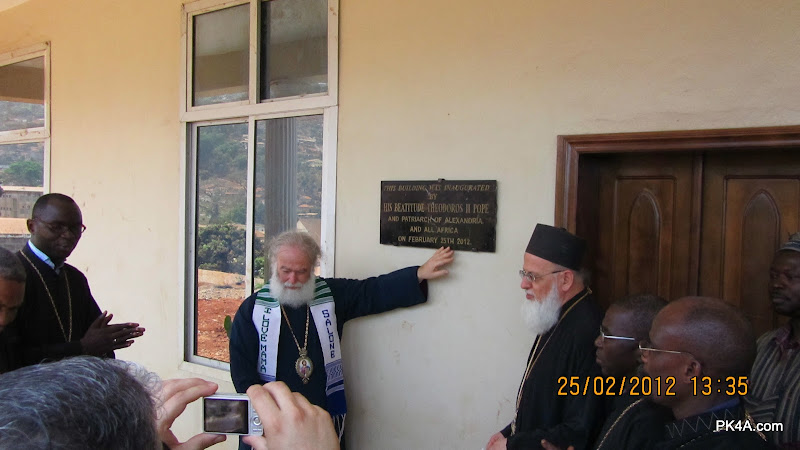 Freetown on a steep hill (Tower Hill) which overlooks in a stunning and panoramic manner the entire city below stretching to the Atlantic coast. It is the acropolis of Freetown.

On this acropolis compound we have built our Diocese Centre, the College and the College Chapel (Sts. Constantine and Helen). Foundations stones were laid for both the Church and the College. This was followed by an official lunch where His Beatitude was introduced to most of the Diocesan staff members and to Mr. Abdul Kargbo (a diplomatic representative of Sierra Leone to East Africa). Mr. Kargbo has been of valuable assistance to our Mission in Sierra Leone from the very beginning of its inception.

On Sunday morning His Beatitude and His Eminence were received at the Cathedral by the clergy and a full congregation. Further ordinations were performed during the liturgy. His Beatitude officially honoured several people who had played an important role in the development of the Holy Diocese of Sierra Leone. These included a former Minister if Lands (Mr. Benjamin Davis), the Minister for Foreign Affairs (Mr. Joseph Dauda), the Deputy Ambassador of Sierra Leone to East Africa (Mr. Abdul Kargbo) and representative of our Australian sponsors- Paradise Kids 4 Africa (Mr. Anthony Sklavos and my sister Miss Mary Adams).

The next day (Feb. 29th ) we made preparations for our departure to the Gambia. Father Markos (newly ordained) and myself would accompany His Beatitude and His Eminence to Banjul. Here the Diocese owns a double story house in an exclusive part of Banjul – Brufut Gardens. The plan is to use this premise to generate income for our Diocese. With His Beatitude’s blessings, we are hoping to establish an international level child care and kindergarten school (Paradise Kids International School), with an international curriculum and international teachers, catering for the children of the middle and upper middle class residents of the Brufut Gardens location. In this way the funds generated will assist in establishing churches, schools and philanthropic projects in more economically deprived areas of The Gambia and elsewhere in our Diocese. If that plan fails we can always rent the house.

Meetings with the Government of The Gambia

Upon our arrival at Banjul airport His Beatitude was received as an official visitor and presented with VIP state protocol. The next morning we were escorted from the Ministry of Foreign Affairs to State House where we met with the Minister for Agriculture, the Minister for Finance, the Minister for Works and the Secretary General representing His Excellency the President of The Gambia (Yahya A.J.J. Jammeh).

His Betide spoke about our spiritual and philanthropic goals for The Gambia. The Ministers in turn welcomed His Beatitude and spoke about the cordial and tolerant Islamic-Christian relationships prevailing in the Gambia (The Gambia is 90% Islamic). We made a petition for the granting of land and our hope to asset in any way we can in development in The Gambia. It is important to note that The Gambia is now facing an acute food crisis due to agricultural failures.

Following this historical encounter with The Gambian government His Beatitude visited the Diocese house in Brufut Gardens where he expressed his desire to render the estate into an income generating project. Because of her wide experience in primary school teaching and administration in Australia, Miss Mary Adamopoulou (Mary Adams) was nominated to undertake the challenge of transforming the Diocese House into an early childhood care centre and school. This project should begin operations in January of 2013.

The next day His Beatitude flew to Nigeria.

The Aftermath of the Papal Visit

As a direct result of tis historical visit by His Beatitude to the Diocese of Sierra Leone, we have noticed more interest in our Church. More people are attending our Sunday liturgies as a result of this visit. We have had a significant deal of press and media coverage. We can now claim to be an established Church in Sierra Leone’s ecclesiastical landscape. And all this by God’s grace in four years.

We the Orthodox of Sierra Leone sincerely thank His Beatitude Pope and Patriarch Theodoros II for the honour and blessings he granted us through his historical visit. May our Lord Jesus Christ grant him many years.

We also thank our sponsors especially Paradise Kids 4 Africa for their invaluable assistance in the development and work of the Holy Diocese. May God bless our sponsors and supporters. Without you it would be very difficult to administer such an elaborate Mission.

Above all we thank God in Christ for the mighty blessings He is pouring upon our Diocese . May His Holy Name ever be praised.