Biography – Themi – Apostle To The Hungry

“A rock star, atheist, Marxist, world-class theologian, African missionary, and a Greek Orthodox Bishop all in one lifetime? Bishop Themistocles Adamopoulo’s story reads more like a bestselling novel than a biography”. 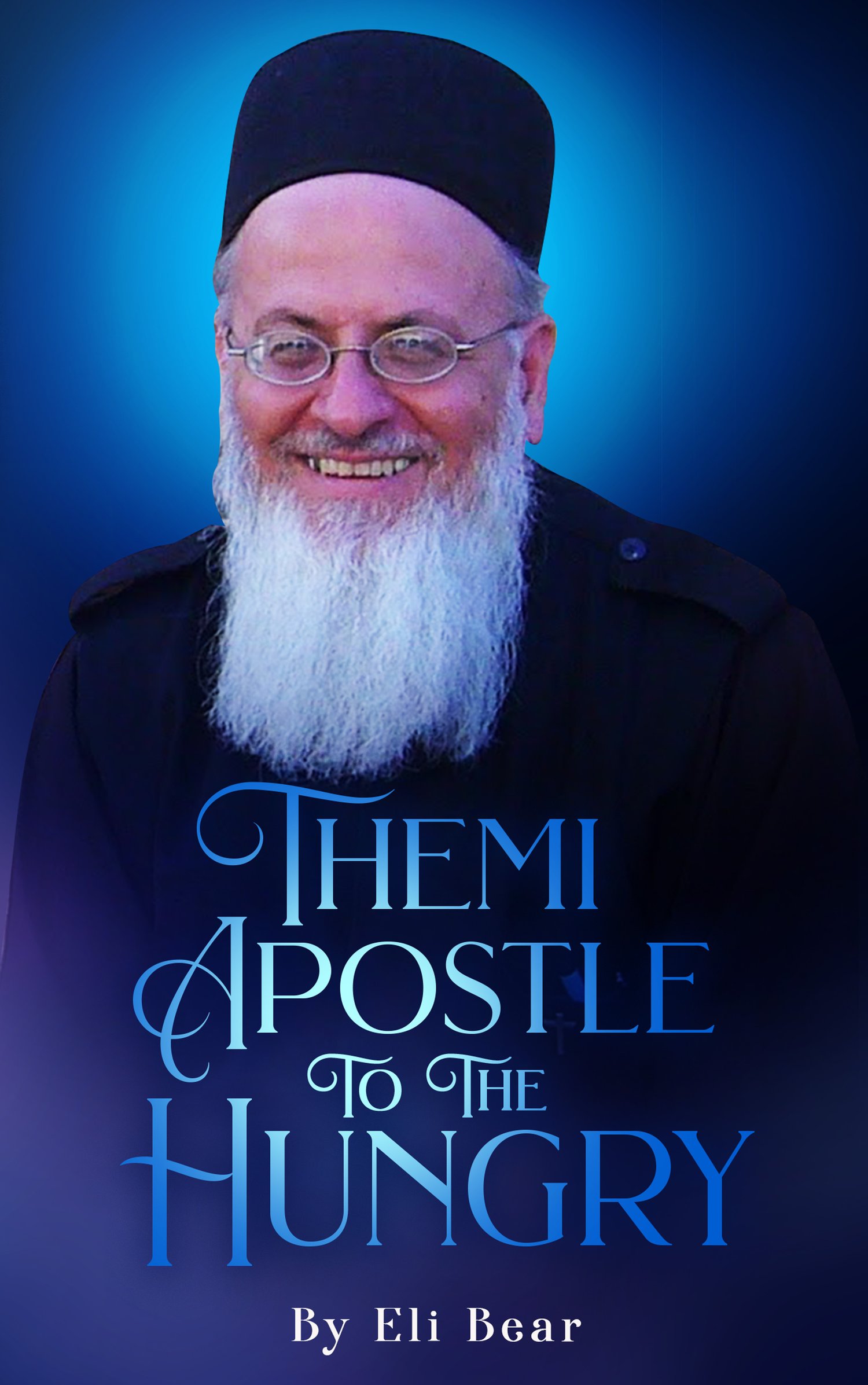 Skeptics say there are no genuine Christian heroes who live their lives only to serve Jesus and those most in need.

Humanists contend that we don’t need to believe in God to be virtuous. They aspire to be “Good without a God.”

Atheists argue that the world has evolved beyond the need for Christianity and that we will all be better off when we stop believing in the “God myth.”

The life story of Themi Adamopoulo is powerful evidence that the skeptics, humanists, and atheists are wrong.

After a personal tragedy, Themi’s rock star, atheist persona was shattered. Over a few months, a series of Divine visions changed a young man from a lost soul into a servant of Jesus Christ. He earned degrees in theology at some of the most prestigious universities in America and became a distinguished scholar.

In the late 1990s, events led Themi to follow another path, serving the poor in his native Africa. Since 2008, Bishop Themi has battled Ebola and foes, both earthly and spiritual, to feed, educate and offer the love of Jesus to thousands of West African people through his Holy Orthodox Mission in Freetown, Sierra Leone.

After a personal tragedy, Themi’s rock star, atheist persona was shattered. Over a few months, a series of Divine visions changed a young man from a lost soul into a servant of Jesus Christ. He earned degrees in theology at some of the most prestigious universities in America and became a distinguished scholar.

How to get your copy

Excerpts from Themi – Apostle To The Hungry

From Chapter 1 – Hell on Earth

But for the first twenty-plus years of his life Themistocles Adamopoulo, or Themi Adams as he was then known, wanted nothing to do with Jesus Christ. This valiant Christian priest who was bravely risking his life for his flock was once a long-haired hippie, atheist intellectual who thought the world was all about The Beatles, The Rolling Stones, Hendrix, and Neo-Marxism and being a learned, secular academic.

As was true of many of the servants of Christ who came before him, Father Themi had a past that God used to create the new man he eventually became.

From Chapter 5 – The Rock Star

Always looking for an opportunity to shine, the boys decided to participate in the annual Moomba Festival. Roughly akin to a large state fair in the United States, the Moomba Festival runs during the Australian Labour Day holiday from Friday to the second Monday in March. In 1964, one contest at the festival was for the musical group that looked and sounded most like The Beatles.

The Flies won the Moomba Beatles contest, which proved their coming-out party. A Melbourne area promoter, Gary Spry, saw them perform at the Moomba Festival. Immediately after that, Spry became The Flies’ manager and signed the band to a recording deal with RCA Records.

From Chapter 9 – Epiphany: Heaven and Hell

Themi was in awe, in a state of rapture. Despite its intense yellow or golden brightness, he looked right into it without discomfort. The character of the Light never changed; it swirled and swirled as Themi watched it. He heard nothing – there were no voices in his vision, though there was a noetic understanding of its Divine nature.

The stars became brighter, and the trees had a glow around them. Themi did not feel alone or isolated but rather part of a great plan, a grand design, a part of God’s creation. He sensed that the meaning of life was being revealed to him. He felt a verification that there is a metaphysical world, a spiritual realm that most do not know exists. The vision, at its essence, evoked a haunting and unspoken sense of Christianity, of Christ.

From Chapter 10 – Born From Above

Themi was “born from above,” as Jesus described in John chapter three. Contrary to popular Protestant theology, this famous passage is best translated as “born from above” rather than being “born again.” The text refers to the necessity of a convert to Christianity to completely re-orient oneself, discard their old lifestyle, and fully adopt the faith.

He was childlike in many ways, almost helpless. Themi questioned everything worldly and materialistic as he discovered Gospel spirituality and its way of thinking, talking, and behaving. He was thoroughly convinced of the reality of Christ by his visions. Now, he had to conform his life to the teachings and example of Christ.

Many aspects of Mother Teresa’s life caught Brother Themi’s attention. He marveled at her resilience and fearlessness. He greatly admired her humility. Although she, by her own admission, was not a theologian, Brother Themi could not argue with her that Jesus Christ’s most urgent and compelling call was to show mercy to the poor. He believed that Mother Teresa was translating theology into pure praxis.

This small, fragile, aged woman was perhaps the most powerful example of a Christian in action he had ever seen. Teresa’s work made him think about St. Francis of Assisi, Christ’s Medieval beggar. Both Francis and Teresa had given up everything to serve the poor. They both considered their poverty to be a form of spiritual wealth.

While both St. Francis and Mother Teresa were not Orthodox saints, they both represented a road to Heaven by embracing poverty and working for the poor.

From Chapter 18 – The Ebola Crisis Begins

By September 2014, West Africa was descending into chaos. In Father Themi’s words, “People are being turned away, and they are dying in the streets. Gets worse, not better. The entire city is covered with bodies; there is nothing we can do.  Fear – I see it in their eyes. I don’t rest.” The Sierra Leone national government declared a state of emergency and locked down the entire country for three days. Curfews and other  movement restrictions were put in place and remained effective for months to come.

The death count was rising exponentially. Father was doing his best to keep everyone under his care safe, distribute extra supplies to local authorities as he could, and feed and shelter as many people as possible. He was exhausted, and his limited resources were strained to the breaking point.

Bodies are being left in the streets here for days at a time. People will not touch them for fear of getting the disease. Burial crews are understaffed and overworked. Most of our clinics, hospitals, and pharmacies have shut down. Doctors and nurses have fled, fearing for their own lives, leaving an already impoverished medical infrastructure in a derelict state.

The international community has let West Africa down. I listen to the BBC radio every night. Over 5000 people have died from Ebola in West Africa so far. Yet BBC news broadcasts are filled with the latest updates on two or three Westerners with the disease. We get minute-by-minute progress reports on Western people fighting for their lives in state-of-the-art medical facilities, while every hour of everyday people are dying here in large numbers.

The Ebola crisis tested Father’s endurance and strengthened his faith. Considering that the poorest of the poor and hundreds of vulnerable children were under his care, the fact that Father was able to help protect all of them is nothing short of a miracle. By the grace of God, not a single baptized member of the Orthodox Mission in Sierra Leone died from Ebola.

From Chapter 21 – Reflections and Wisdom

Brother Louie says, “Father Themi is the opposite of everything we call natural. That’s because he’s a holy man. He doesn’t care about money; he doesn’t care about his own life. He’s a disaster as a businessman. He will not sack (fire) people when they’re bad. All he does is forgive people. He is the last to judge anyone.”

“I’m a businessman. I want to run things in a certain manner. Brother Themi does things the holy way, not the business way. He annoys the crap out of me. Jesus annoyed people.”